The Toyota FJ Cruiser is one of the most recognisable modern Toyotas. This rugged machine brought a generous dose of style to the off-road world when it was launched in North America and later around the world (but sadly not in the UK) from 2006. Here are 10 fun facts to know about the FJ Cruiser. 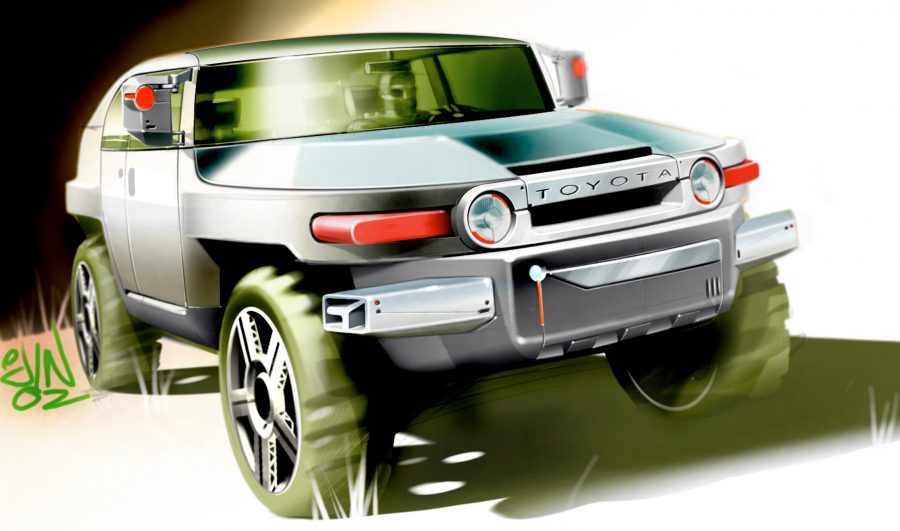 The exterior design by Toyota’s Calty Design Research studio in Newport Beach, California, paid tribute to the classic FJ40 Land Cruiser that has a huge cult following around the world. When the concept was unveiled at the 2003 Detroit Motor Show, reaction was so positive that Toyota decided to put the FJ Cruiser into production. 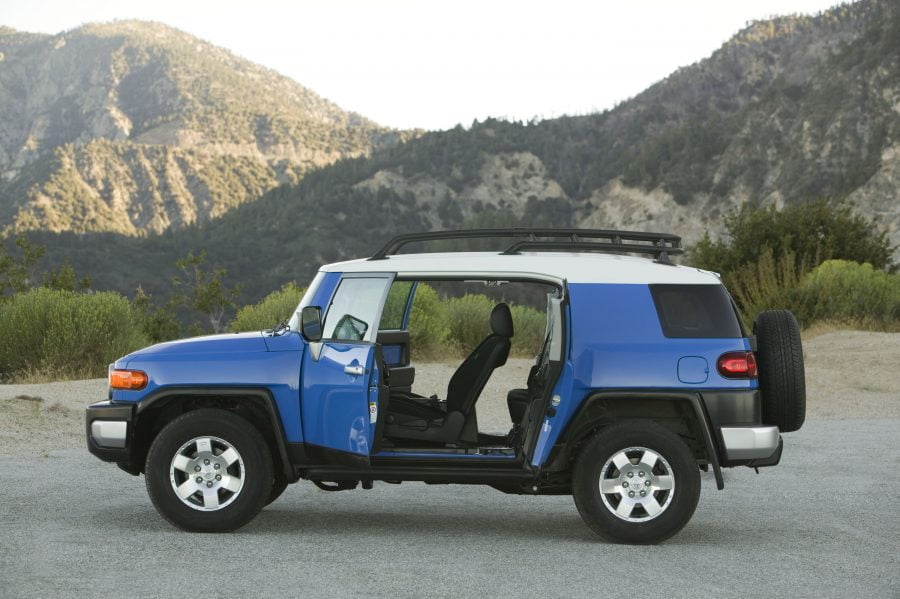 When the production model went on sale three years after the concept was first shown, the SUV’s characterful styling remained remarkably faithful to the concept vehicle, including the distinctive, thick side pillar behind those truncated rear doors, which opened rearwards for access to the back seats. The FJ Cruiser’s short-wheelbase, ladder-frame chassis was based on the one used in the 120-Series Land Cruiser Prado with power from a dependable, 4-litre V6.

FJ Cruiser is a proper off-roader

Toyota wanted serious off-road performance from the FJ Cruiser, so it tested the car on demanding trails like the Rubicon that are popular with US off-road enthusiasts. An active traction control system, low-range transfer case, electronic-locking rear differential and a high crawl ratio with the manual transmission option all help keep you moving on the trail. Not all FJs were 4WD, though: a RWD option was popular with customers who preferred their vehicles to be more Cruiser than FJ. 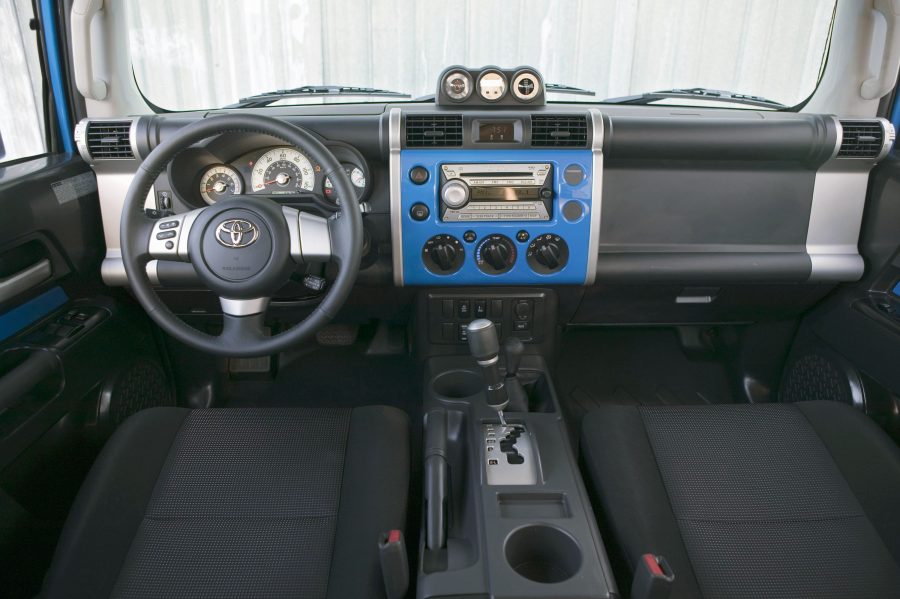 The interior is made to get dirty

The FJ’s interior is adapted to the go-anywhere brief with ventilated, water-repellent seats and easy-to-clean surfaces. The seats are upholstered with a fabric backed by a special breathable resin coating, which helps them to shed liquids so that they can be easily wiped down. Liquids are prevented from penetrating the stitched seams by a sealant. Meanwhile the floor surfaces are covered with a grey, rubber-like material for easy cleaning.

It doesn’t skimp on windscreen wipers

The FJ Cruiser has three wipers for the windscreen. The three wiper arms cover almost the entirety of the wide, near-vertical front screen, so you’ll always be able to see a path through the mud, sand or river washing over the bonnet. Many owners fit an intake snorkel and diff/transmission breathers to go even deeper than the standard 70mm wading depth. 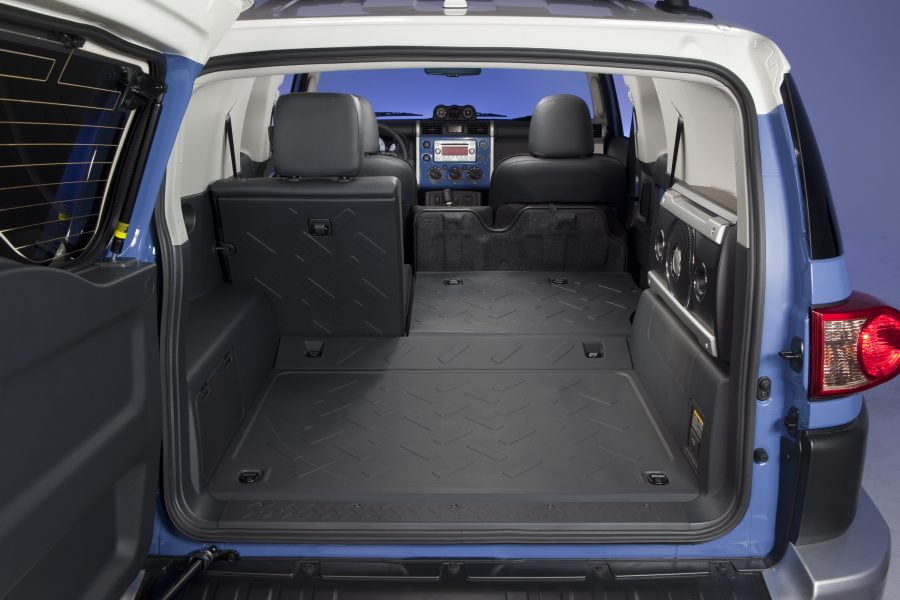 At the time of writing, your money is safe in an FJ Cruiser. The car picked up resale value awards during its time on sale Stateside, but its reputation has grown further since and used prices are as solid as ever. One factor could be relatively modest new sales: more than 200,000 were sold in the US over eight years, but more than half of those came in the first two years on sale, before the global financial crisis took its toll from 2008.

You can see an FJ Cruiser coming (usually)

Voodoo Blue is the name of the FJ Cruiser’s signature bright blue colour, paired with a contrasting white roof. Sun Fusion (yellow, to you and I) was another popular choice while special colours available during the car’s eight-year stay in the North American market included Army Green, Cement Grey and Sandstorm (beige). Enthusiastic owners have given their vehicles a makeover with wraps depicting camouflage, Jurassic Park, paint splatters, mountain ranges and more. 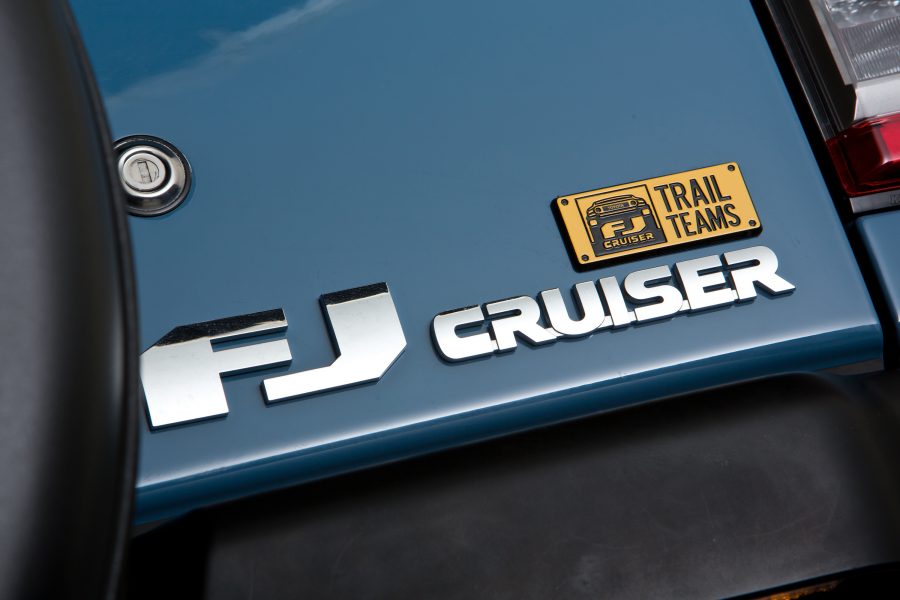 Tuning and modification is popular

Toyota Racing Development (TRD) weighed in with a telling contribution to the US run-out model in 2014, the Trail Teams Ultimate Edition. The reworked suspension boasted TRD springs that raised the ride height at the front to level out the stance and improve the approach angle when off-roading. TRD Bilstein race dampers provided greater damping force, articulation and high-speed stability, while remote reservoirs for the rears increased the resistance to damping fade. Other TRD mods included a front skid plate and 16in beadlock wheels.

It remains a cult car in the UK

FJ Cruisers were never sold new by Toyota in the UK, but dozens are on the roads today thanks to personal imports or specialist brokers such as Prestige Cars. Right-hand-drive cars from Japan are an easy fit to UK roads, while other prospective owners prefer to access the more plentiful LHD cars from the North American market. 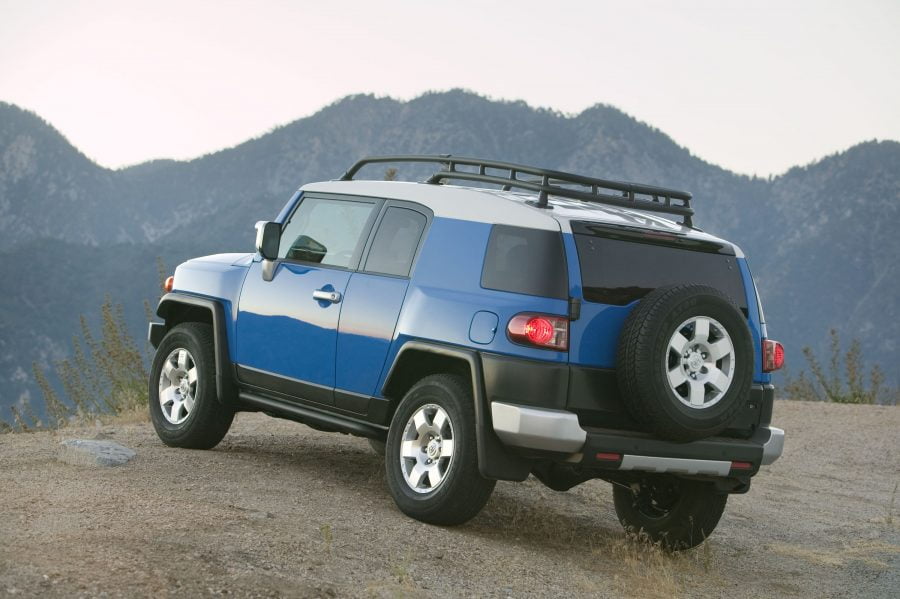 You can still buy one… somewhere

The FJ Cruiser is still on sale. Seven years after it disappeared from view in North America and four years after the ‘Final Edition’ in Japan, the FJ Cruiser remains in production for sale in South Africa, where the R719,600 (about £36,000) list price includes a CD player as standard equipment! In Middle Eastern markets, the FJ Cruiser benefits from an infotainment upgrade to a 12.3in screen with Apple CarPlay and Android Auto connectivity, as well as an air compressor to reinflate your tyres once you’re done off-roading. Like the FJ40 that inspired it, the FJ Cruiser has an appeal that looks set to run and run.