Toyota Gazoo Racing UK British Touring Car Championship star Rory Butcher is aiming to make his mark both on and off-track in 2021, after committing to offset his carbon footprint by planting trees at race circuits all around the country.

Butcher has been a leading contender in the UK’s premier motor racing series since making his BTCC debut four years ago, with six race wins to his name as well as the 2019 Independents’ title and Jack Sears Trophy. 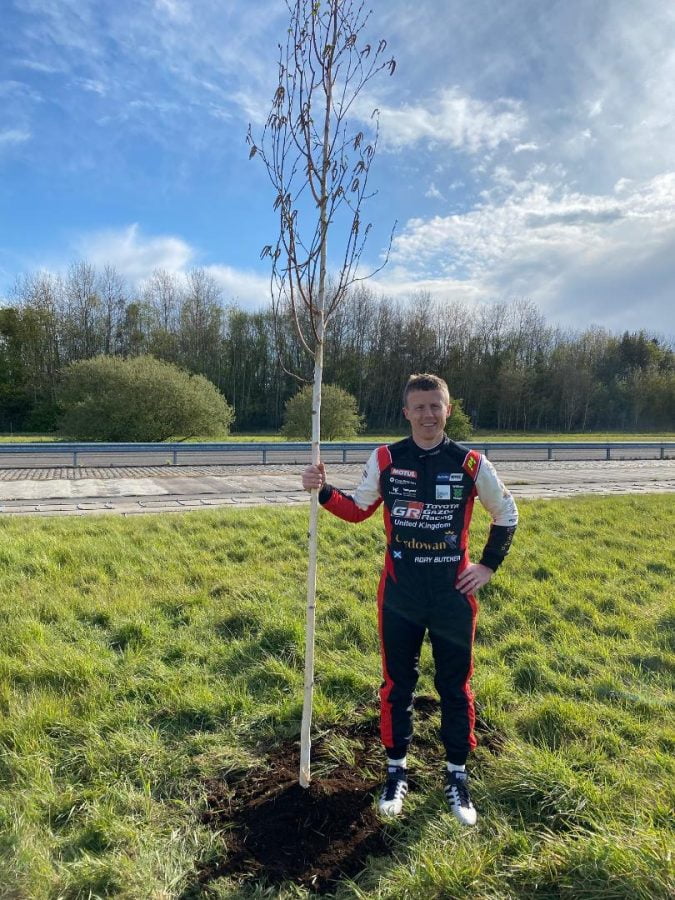 For the 2021 BTCC campaign, Rory Butcher has joined the Speedworks Motorsport-run Toyota Gazoo Racing UK outfit, as he plots an assault on the overall Drivers’ crown.

In addition to targeting the biggest prize in British motorsport, Butcher is also eager to play his part in protecting the environment and has pledged to neutralise the carbon footprint generated by travelling to circuits and back from his home in Kirkcaldy.

Based upon his mileage and average fuel consumption, Butcher and Adam Brindle – CEO of commercial landscaping company, the Grounds Care Group [pictured above and below at Toyota Motor Manufacturing (UK) Ltd, where the first tree was planted yesterday] – calculated that 72 established trees* will need to be planted to instantly offset those annual emissions. Moreover, the 34-year-old has vowed to plant additional trees for every podium he achieves this season behind the wheel of his British-built Toyota Corolla – three for every victory, two per runner-up result and one for each third-place finish. 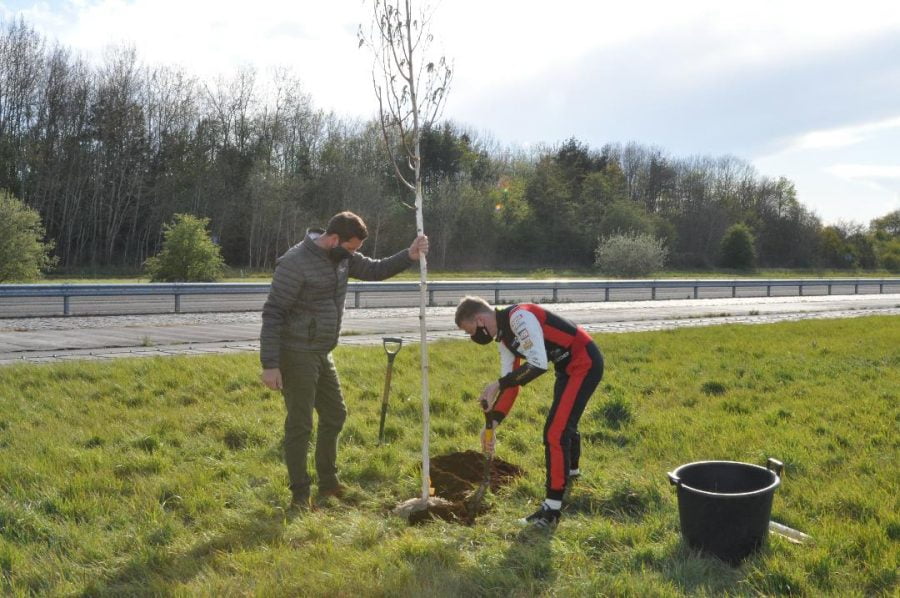 Butcher plans to plant the trees in November, which is peak season to ensure they have the best chance of taking root and fully growing, and he is currently seeking the support of all the tracks on the BTCC calendar. Silverstone – in conjunction with the British Racing Drivers’ Club, of which he is a member – and his home circuit of Knockhill have already confirmed their support for the initiative, whilst positive discussions are ongoing with other venues.

“As a racing driver who travels all around the country to compete, I inevitably leave a carbon footprint, and with the Grounds Care Group being all about sustainability and biodiversity, that presented us with an opportunity. Together, we came up with the idea of trying to offset those emissions via a cool project, to help to spread the word about the urgency of tackling what is unquestionably one of the biggest issues of our time – climate change.

“I used to fly to race weekends, but this year I’ll be driving to them all in my new Toyota GR Supra from Toyota GB. That being the case, Adam [Brindle, Grounds Care Group CEO] and I calculated the carbon footprint of travelling from my home in Scotland to all BTCC races and associated events, meetings and tests, and the equivalent number of trees I will need to plant to counteract that. But then I decided I wanted to go even further, by factoring in more trees for every podium finish this season.

“On a personal level, this is tremendously important to me. I’ve got two kids, and I’m thinking of their future and want to help make sure the world is a better place for them as they grow up. We all have a duty to look for ways to reduce our carbon emissions and try to halt and reverse climate change.

“I have two chief passions in life – motor racing and the environment – which clearly represents a conflict of interest. Having followed the BTCC closely since I was a young child and attended a lot of races, I wanted to show that we can all do our bit and raise awareness that we can enjoy both. We all have a responsibility to the environment and if we all make small modifications to how we travel and consume, and all make small contributions then we will see big changes.

“It’s fair to say that motorsport has not traditionally had a great reputation when it comes to the environment, but what people sometimes fail to see is the essential role it plays in the development of new and more sustainable technologies – with the BTCC’s forthcoming transition to hybrid power just such a case in point, making it a great fit for our business.

“Tree planting is one of our key focusses at the Grounds Care Group, so when Rory Butcher mentioned to me that he wanted to find a way to offset his carbon footprint from travelling to race events, it seemed like the natural solution. Race circuits might be best known for the ribbon of Tarmac on which the cars compete, but they also have acres of green space ripe for planting trees, which in turn will help to preserve the land for generations to come.

“One of our big commitments is to planting native British trees – sourced from UK growers – which have co-evolved to support surrounding ecosystems. That makes them vital to the long-term sustainability of all the animal, bird, reptile and insect species living in that environment, providing these wildlife habitats with an abundance of what they need to thrive while encouraging biodiversity and enhancing the natural landscape.

“Partnering with Rory has been amazing, and this is just the beginning of what we hope will be a long-lasting relationship. He has been so involved in this project and we are all hugely excited about embarking upon it with him. We would also like to thank Toyota GB and all the racetracks that have come on board so far. Hopefully, Rory will achieve plenty of podiums this season so we can plant even more trees come November, and I’m very much looking forward to then returning to the circuits next year to see how they have grown.”