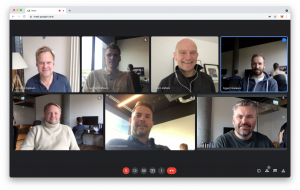 Monerium is the first company authorized by European regulators to issue money on blockchains, and recently launched blockchain IBANs, the first of its kind.

While the first wave of DeFi has been very USD-centric, Monerium is opening on-chain services to new mainstream users who will bring hundreds of billions of EUR and GBP liquidity onto blockchains.”

REYKJAVIK, ICELAND, September 22, 2021 /EINPresswire.com/ — The Icelandic fintech startup Monerium has raised $4 million to accelerate the issuance of major currencies on blockchain in Europe, starting with the world’s second most traded currency, the euro.

The investment was led by Taavet+Sten, the investment vehicle of Teleport founder Sten Tamkivi and Taavet Hinrikus, the first employee of Skype and co-founder of fintech giant Wise (formerly TransferWise). Earlier this year, Sten and Taavet partnered in a new investment firm backing tech startups including companies in the emerging DeFI (decentralized finance) economy on blockchains.

“On a high level you can think of DeFi as just a natural extension of our broader ‘future of money’ financial freedom thesis,” said Sten Tamkivi. “We’ve benefited a lot from the freedom to invest not just in equity of established companies, but to also take token positions or use on-chain yield strategies. While the first wave of DeFi has been very USD-centric, Monerium is opening on-chain services to new mainstream users who will bring hundreds of billions of EUR and GBP liquidity onto blockchains.”

Monerium has recently launched blockchain IBANs, the first service of its kind. Blockchain IBANs allow European individuals and companies to send and receive euros directly between bank accounts and their blockchain wallets without going through crypto exchanges. “We are issuing authorised digital money as tokens on blockchains through our IBANs to enable mainstream adoption of decentralized finance. Users should be able to transition safely and seamlessly between existing bank accounts and DeFi” said Sveinn Valfells, CEO of Monerium.

Unlike recent experimental “stablecoins” issued under non-uniform terms of private companies, e-money is a standard for digital cash that has been in place in a major jurisdiction, Europe, for over two decades and offers users a high degree of protection, including a direct claim on the underlying safeguarded assets. The market capitalization of stablecoins exceeds USD 100 billion, and all the most liquid coins are denominated in US dollars.

“DeFi has the potential to go beyond speculation and make mainstream financial markets significantly more efficient and innovative. Within a few years, trillions of euros on blockchains will support various forms of mainstream DeFi services. For that to happen, there needs to be a compliant form of digital money on blockchain and easy to use gateways between bank accounts and blockchain wallets. Monerium provides both” said Sveinn, CEO of Monerium.

Monerium will use its newly raised capital to expand the team and scale operations in preparation for bringing the first billion euro tokens to blockchains.